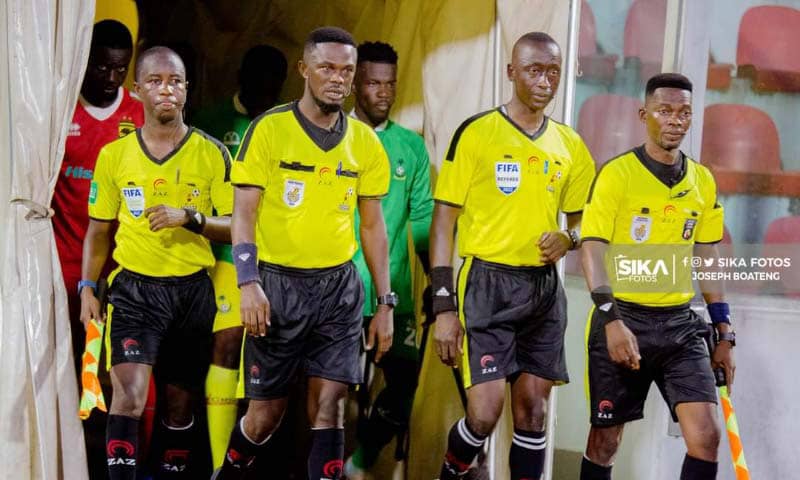 An expected tough encounter at NAB 1 park between the first two teams on the league table was suddenly tainted by the shocking exhibition of disputable performance by the center referee and his assistants.

A ding-dong affair in the early first half that saw many attempts from the home side knocking for the lead subdued by the Kotoko’s defense men. The partnership of Mubarik Yusif and Maxwell Agyemang ably contended with the aerial balls when Aduana Stars resorted to crosses into the last quarter of the first half.

Skipper, Richard Boadu made sure to offer the best of support to the backline whilst the efforts of Richmond Lamptey and Eric Zeze to supply Steven Mukwala upfront were curtailed by the sloppy and deplorable pitch of NAB 1 park.

However, Mohammed Misbau, a class one (1) referee based in Tamale machinations against the visitors became obvious after he and his two assistants left Emmanuel Gyamfi unpunished when he intentionally stomped his foot on the Kotoko goalkeeper and later pummeled Justice Blay who tried to cool down the rift

The unjust officiating against Asante Kotoko continued as the center referee kept on awarded almost all the 50-50 tussle in favour of the intimidative home side. Incessant pressure mounted on the away side as decisions were manipulated to aid a goal for the Ogya boys but thanks to the phenomenal saves from the Kotoko shot stopper Frederick Asare who stood in to ensure a parity for the visitors.

Threatening tackles on the Kotoko attackers at a scoring positions that could have warranted bookings to the Aduana defenders were all neglected to urge the home side to quest for a goal at all cost. Finally, Coach Seydou Zerbo and his Fabulous lads demonstrated resilient performance despite the frustrations from the 12th men to salvaged a vital away point on the road.

The league champions comes back home to continue the chase for the top against Olympics on Sunday, 8th January at the Baba Yara sports stadium.