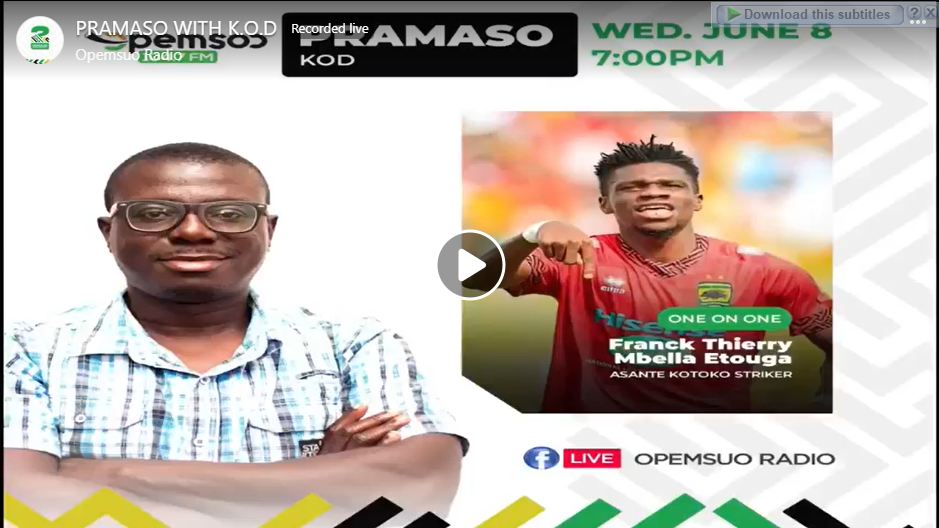 Kumasi Asante Kotoko’s inform striker and current goal king of the ongoing Ghana Premier league season Franck Mbella Etouga has disclosed in his latest interview the first time he heard about Kumasi Asante Kotoko and what it means playing for the biggest team in Ghana and one of the best on the African continent.

Prior to the coronation match in Kumasi Baba Yara Sports stadium on Sunday, the management and technical team of Kumasi Asante Kotoko have decided to embark on a media tour to thank their supporters as well as create more awareness about the upcoming ceremony. Due to this a number of players, coaches and management team members have been going on media tour in various media houses. Among these personnel are the communications and brands manager, David Obeng Nyarko and the most inform striker in the country Frank Thierry Mbella Etouga. The duo were on interview live on Opemso Radio’s evening sports segment yesterday by the veteran journalist Kwabena Obeng Dankwa (KOD).

David Obeng Nyarko explained that the reason for embarking on the media tour is to Express their gratitude to the entire Kumasi Asante Kotoko Supporters and Everyone who played a role in making sure the team won the league this season. He further explained that they wanted the supporters to see and hear from the principal actors of the game, thus the players and coaches so it will be easy to identify the players anytime we see them around the stadium and any other place. He also stated that this was an opportunity for them to create more awareness on the upcoming coronation match on Sunday at the Baba Yara Sports stadium against Elmina Sharks. He appealed to the supporters to come to the stadium in their numbers to cheer the team on as they will be playing the last home match at home and also to celebrate the league trophy.

Franck Etouga Mbella also started by telling us a bit about himself and why he chose to play for Asante Kotoko. Mbella revealed that he comes from a football family because his grandfather,  mother and father were all footballers. He continued “I started kicking the ball when I was about two years. I kicked anything I could get”. He revealed that his mother was the one who motivated him to play football when he was a boy. He continued; ” I scored a lot of goals in the academy level. I remember scoring about 40 goals in 20 matches in my second year at the Academy. In my first season I scored 25 in 11 matches and 17  in the next season.

When asked about the first time he heard about Kumasi Asante Kotoko he said ” The first time I heard about Kotoko is when they came to Cameroon to play Coton Sports. That they they played tiki Taka football and everybody was talking about them. No wonder they won the match by 3 goals to 2″

On why he signed for Asante Kotoko ; he said that Kotoko is one of the biggest teams in Africa so he feels honored playing for such a team. He continued ” when I saw the team for the first time in Dubai preseason I was amazed by the kind of intensity, quality of play, and how fast the passed the ball. My brother asked me, are u sure u can play with them?”

When asked about his friends in the team he replied ” Maxwell Agyemang (Akito) because he can speak both English and French languages. I also like goalkeeper Ibrahim Danlad and Samuel Appiah very much but that is not to say I don’t like everybody,  i like the whole team very much”

On coach Prosper Narteh Ogum; he said “it is very easy to work with coach Prosper. He is like my senior brother, father, and a friend.

He continued by disclosing what motivates him most, his ambitions for next season among other important things. You can click on the link below to watch the full interview.