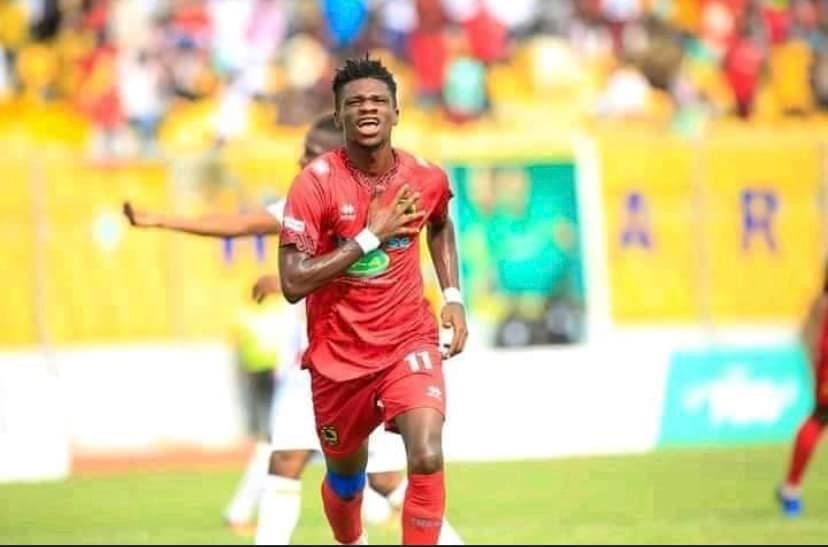 The Cameroonian Football Federation has handed over a maiden call-up to Asante Kotoko’s inform striker, Franck Mbella Etouga ahead of their upcoming AFCON Qualifiers. It comes as no surprise to anyone who has been following the ongoing Ghana Premier league 2021/2022 season to hear that Inform striker Franck Mbella has been called up to play for the Cameroonian National team in the upcoming Total AFCON Qualifiers.

Mbella joined Asante Kotoko at the start of the 2021/2022 season and the striker has already taken the league by storm. He has been scoring goals with rampant rapidity since playing his first game for the current league leaders. He has adopted quickly to the style of play in the Ghana premier league and linking up very well with his teammates especially his country man and striking partner Georges Mfegue Rodriguez and the duo are blazing the GPL with Skills, pace, and goals.

Mbella is now the leading top scorer in the league with 19 goals so far. He has already broken the record for the for the highest number of goals scored by any Kotoko player in the league which was held by Eric Kwabena Bekoe with 17 goals. Mbella has broken the record with 19 goals scored so far with 6 more matches to play and is now hoping to break the all time record held by Ishmael Addo with 23 goals. Ishmael Addo’s record has stood for more than 20 years now and breaking this record will take the striker’s confidence to a different level. He is just four goals shy of breaking this record and with six Matches to go, you can trust the lethal striker to produce magic and take home this record.

The performance of the young striker has cought the attention of the technical handlers of the Cameroonian national team to hand him his maiden call-up to play for the Indomitable Lions. He has been called up to play a part in Cameron’s upcoming Total CAF AFCON 2023 Qualifiers and preparation for the World cup 2022. Cameron will play two Matches against Kenya and Burundi on the 4th and 8th of June respectively. Players and technical team are expected to report to camp on the 30th of May  to the 14th June 2022.

The Association has expressed their gratitude to Mbella and urged him to honor the invitation by reporting on the stipulated time.

The entire porcupine family congratulates Mbella on his call up and wish him the best of luck. We hope this will be the first of many call ups to come as he continue to score goals for our darling football club Kumasi Asante Kotoko and his National team.